Manatee County commissioners approved several major development projects in the Parrish area that clear the path for the construction of a new hospital and a village center.

The projects will include a mixture of residential housing, commercial and office space, and an assisted living facility at North River Ranch, which is under development by Neal Land & Neighborhoods in Parrish.

A conceptual rendering of a 150-bed hospital that was approved for development at Thursday’s land use meeting. Design is not final. 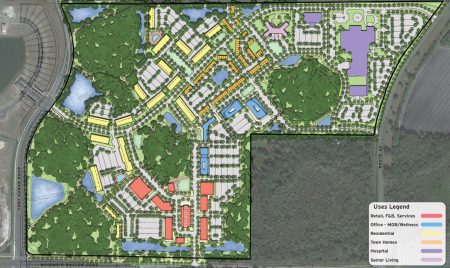 A conceptual plan for a Village Center slated to be built at the Villages of Amazon South, which is a part of North River Ranch community in Parrish. It includes plans for a mix of residential space, multifamily housing, retail and office space, as well as a 150-bed hospital and a senior living facility.

Commissioners approved a slew of changes to the Villages of Amazon South, which is a 1,032-acre project part of John Neal’s massive North River Ranch development in Parrish.

Two phases of the project are residential lots, but Neal Land and Neighborhoods also envision a walkable village center, said Katie LaBarr, a project planner with Stantec, representing the company.

Commissioners unanimously approved zoning changes on a 50-acre parcel from residential to mixed-use to allow construction of a six-story 150-bed hospital and 125,000 square feet of medical office space. The parcel is located about a half-mile north of Moccasin Wallow Road on US 301.